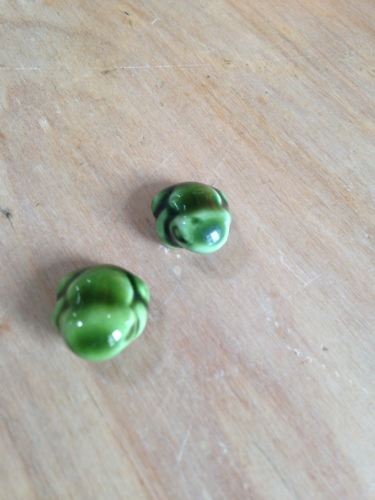 Ever since I was small my grandmother has had a glass cabinet filled with Japanese dolls and figurines. I used to spend hours at her house, memorising the shape and colours of each one, fascinated by how beautiful they were. Sometimes my grandmother would let me play with the tiny porcelain frogs that sat there. The green glaze sat darker in the crevices and they were so beautiful and delicate to me.

My diet has always included the staples of rice and nori, usually with a healthy serving of furikake, which was nicknamed ‘sprinklies’ in my house. We’d ration them like treasures because Napier didn’t have a Japanese food mart, so our supply would come in care packages from my aunt who lived in Auckland. When our local supermarket brought in a Japanese shelf to the international food aisle we were overjoyed, and we could have an entire serving of furikake per meal instead of a tiny hint, and I’d eat nori in sheets as a snack.

I had a Japanese doll in a Kimono. The fabric was a beautiful blue and her hair was so soft. I could never tie her obi quite right after I foolishly undid it, and her hair ended up with a kink in it that would never quite flatten. Plastic katanas, lone copies of ongoing manga anthologies, cassette tapes of nursery rhymes, a small and ratty popup book with Japanese I couldn’t read. This was my exposure to Japanese culture as a young child. I was fiercely proud of it.

At the same time I hated the things about my own face that in part came from my Japanese heritage. My dark hair and eyes caused me constant anguish throughout primary school,  where I desperately wanted pretty blonde hair and lovely blue eyes. I cried a lot. As a teenager the dark hair on my body made me feel anxious and ugly. The thick strands blended into a forest across my forearms, reminding me that no matter how much I plucked, shaved, bleached, waxed or stripped, the truth of my other-ness would seep out again, exposing my very DNA for anyone to look at.

I found comfort in the language. Japanese is so beautiful to look at, and it felt like a big hug to learn. I was connecting to a part of myself. They say you carry the experiences of your grandmothers within you. I know it’s meant in a scientific statement relating to significant trauma being read in your DNA, but I like to pretend there’s something poetic inside me, like a compass needle that pulls me towards magnetic north. When I am learning Japanese I feel it tug.

I am grateful to the times I have spent learning Japanese, but the experience in a New Zealand classroom always felt strangely artificial to me. The language is cut up into chunks that didn’t make sense to me and called curriculum. My own knowledge of Japan and Japanese-ness was brushed aside and discarded as irrelevant in the context of the classroom. What I knew was small and inconsequential and not Proper Japanese Stuff. I learnt the language in the same way my white and English-speaking classmates did, and this little bit of exposure created an imperfect filling to connect the fragments of Japanese I knew from my own life.

I have only visited Japan once. A month in Hokkaido in January, staying with my aunt. I was sixteen and freshly diagnosed with depression. I didn’t know much of anything, but those few weeks helped cement something in me that has stayed solid ever since. Just little things in the eyes of anyone else, I’m not sure I could even properly describe it. I’d use images like kotatsu, tatami rooms and the soft un-sound of proper powdered snow. I found something there, in between the sushi and shu-creams and television shows. It’s a little space that was empty before, but afterwards it knew that there was a piece of me that belonged to Japan. Not just as a part of my heritage, but as a part of myself.

My life is in New Zealand, and I’m not sure if I will ever be brave enough or lucky enough to live in Japan like I imagined I would at sixteen. However, I am still connected and just because I might never call the land home, the culture is still a part of me. My time working in a Japanese-run sushi shop helped me to connect my life in Wellington to Japan, exposing me to Japanese language in a practical setting for the first time in my life. I found a lot of my clumsy cut-up school Japanese flooded back to me, and I was able to understand quite a lot more than I imagined. By the end of my time working there I was proficient at understanding enough Japanese to make and sell sushi. Since then I’ve tried to be more active about what I expose myself to and connect more with other Japanese diaspora online, or at least quietly listen to them when they post.

I am currently learning Kanji. It makes me happy in a way that I can’t quite explain in words. It’s that little ping, heading me towards magnetic north. Having a mixed racial identity can be confusing, especially if like me your cultural marker points have been thin and spaced out. I have been lucky to have the kind of support that I do, to have white-passing privilege 99% of the time. My anxieties are mostly personal and internal, which is a luxury because I can choose to untangle this knot on my own time whenever I feel like it.

I always assumed that learning and knowing kanji would be an unobtainable dream, something I would never be able to find the time and structure and energy to achieve, even in the slightest. Having the ability to finally come back and unlock this door after so long waiting and wanting to is a rare gift I am grateful for. Occasionally a word I know turns up in its grown-up kanji clothes and something clicks into place in my head. My years of exposure to the word flood back to me across time, from my childhood to know, and I am learning the true form of something that has always been a part of me. In another couple of years I will be able to read kanji, and I am looking forward to further unlocking the doors that I know are waiting for me behind this first one.