[I’ve attempted to avoid major spoilers, but some minor spoilers are still present in this piece] 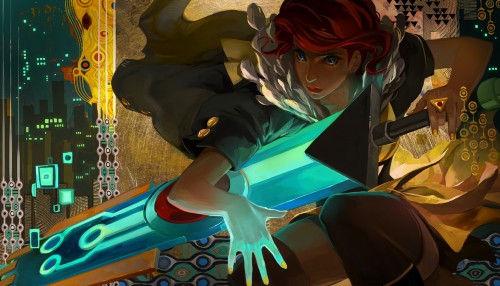 I’ve been looking forward to playing Transistor since I first heard Supergiant were making a new game. I was ridiculously happy to find out I’d get to play as a female character. And a female character who isn’t designed purely for men to look at. There’s no panty shots, no high heels or gratuitous poses. Her costume is practical, and her character and motivations are interesting and unique. But after finishing the game I’m left with some heartache. Transistor promised to be something different, but in a lot of ways it fell back onto tired gendered tropes. Transistor to me still feels like a game designed for men.

I feel like I need to put a disclaimer here to say I thoroughly enjoyed Transistor and will fanatically recommend it to any person who is interested in playing. It is a beautifully well-crafted world and story, and the timing and delivery of the narrative showcases some of the best storytelling in games to date. The battle system is new and engaging, and it’s easy to increase or decrease the difficulty to suit your play style. It is easily one of the most interesting and unique titles of the year. 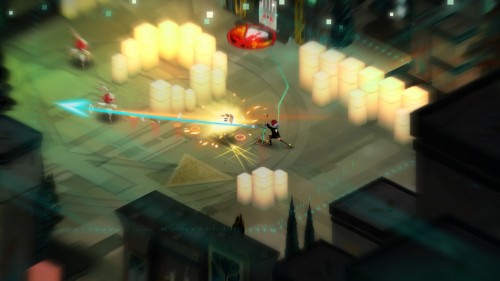 What I want to talk about here is the way that at times I found playing as Red to be claustrophobic. The structure and shape of the story assumed certain things about Red and her relationships that I found to be shallow and patronising. I found the perspective of the story to be a very male view of Red and her actions. Since the entire game is narrated by male voices (Red has lost hers), this feeling became stronger the further into the game I got.

A mute male character gives an air of stoicism and strength. It is a choice not to talk and engage with you. It gives power to his character that he doesn’t give you words. When muteness is a quality of a female character, it’s often because they have been emotionally or physically harmed. This muteness is often ‘cured’ by the care of a good man, or at least that’s the trope.

Red’s story seems to be trying to subvert standard game tropes. Transistor presents itself initially as a twist on the male revenge trope. This time it’s Red out for answers and possibly revenge. The thing I find odd here is that Red is also avenging violence committed against herself. In the male version of the trope, the man is typically unscathed, free to vent his anger on the violence done to the women (And it’s often more than one woman) in his life. Red still has horrific violence done to her, losing her voice, which is a core part of herself and her expression. The end result is that while Red gets to keep her body, she loses her voice, making her almost as silent as the targeted women in the male version of the trope.

Muteness as a character trait is often used so as to not project a voice onto the player. Link from Legend of Zelda never speaks out loud, and neither does the character in Pokemon. Your half of the conversation is always implied through your action and choices. However, your actions and personality is blank too, for you to fill. Red is obviously supposed to be someone. In my initial playthrough I found it difficult to know who that someone really was. 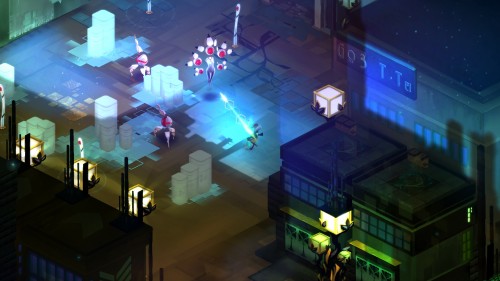 The narration in the game is the voice of Red’s lover, talking in the second person to Red. His consciousness is trapped in the sword, and from there he guides Red through the game, offering advice, history and colouring the world with his memories. The city is a rich and beautiful world, but it’s a world shaped by someone telling you what to find special about it. This has a substantially different feel to third person narration in Supergiant’s other title, Bastion. The closer assumed relationship of second person narration places a lot of pressure on the player to comply within the expected relationship dynamic, or to purposefully push against it. She’s running through a world created by her lover’s words, not her own experience.

While Red manages to maintain motivation separate to what her lover wants for her, her story is still unfolding through his voice and direction. This is cleverly used as a key gameplay mechanic, but as a player I found my eyes rolling more than a few times listening to this guy try and tell Red what to do, or got overly sentimental about one location or another that as a player I was visiting for the first time.

This also has the added layer that as a woman in the real world I have a lot of men in my life that believe they can direct me and tell me where I need to go and what I need to do. How I should be safe, how I should behave, what I should value. I can choose to ignore and do my own thing, but it’s a daily battle just to be able to have autonomy doing something mundane like walking down the street. I play games to escape, but the decisions I had to make in Transistor felt a lot like the ones I have to make everyday when navigating my relationships with men in my life. 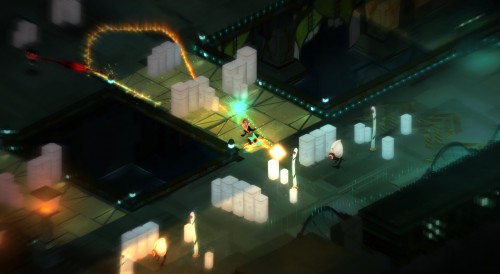 Transistor was far more his story, this nameless, faceless man, than it was Red’s. She’s the poster girl, the action, but all her emotions are implied, or conveyed through a few lines of text on odd occasions if you look for them. Sometimes her emotions, her strength and defiance shine through beautifully by your direction of her, and these are the moments where the story is at its most engaging. But still, all of the vocalised emotion is his emotion, with space for you to fill in the blanks as to how Red responds to his feelings.

At the end of the game I didn’t have much of an idea who Red was, apart from the way she was seen by others. Either by the antagonists who were keeping files on her, or through the voice of her lover. This had me feeling pretty claustrophobic as a player. I like to know who it is that I am playing, or have the freedom to invent my own narrative. I feel like Transistor is inviting me to project my own feelings into Red, but then didn’t give me the space to construct the narrative that I want. It gave me a man’s narrative for me instead.

Red’s choice at the very end of the game deeply disappointed me for a lot of reasons. I was hoping for something that left her with a bit more autonomy and control. She managed to navigate her way through an unfathomable amount of danger on her strength, intelligence and skill. I wanted her ending to build on this direction. Her choice ended up feeling hollow and tacky compared to the ending I wanted for Red. The one I had felt like I was playing towards, that her defiance and attitude through my play style had implied for me.

It’s a weird clash. Supergiant as a company are looking to push barriers and boundaries of storytelling in games. They are making gorgeous games with well-polished environments that balance action and narrative, delivered in a unique and engaging way unlike what anyone else is doing. It is a shame that after all that the core story they deliver in Transistor falls back on tired tropes, and delivers a mainly male narrative.

Making your character a woman isn’t enough – the story needs to be hers as well.