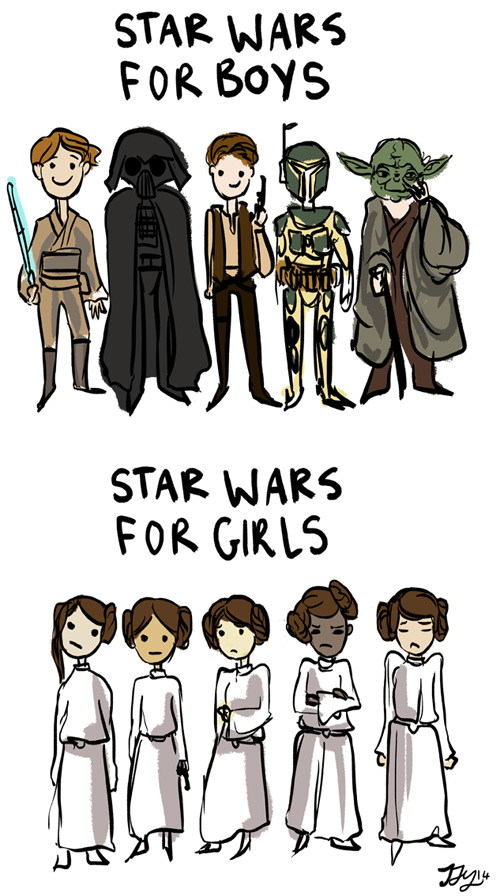 I drew this today to sum up my frustration with the new Star Wars cast featuring two women, and only one new female character. Analee Newitz wrote an excellent summary of the issue here: http://io9.com/hey-star-wars-where-the-hell-are-the-women-1569357077

Because this piece was a delightful mix of geek culture and feminism it received a pretty unique reception. Most people got the joke and enthusiastically agreed with my sentiment. It’s been one of my more popular retweets, which is pretty great.

As well as the many who agreed with me, I also received a couple of kinds of tweets from men (they were all men) who saw my cartoon. The first was pedantry. How dare I forget Luke’s Aunt (who dies in the first five minutes), That other slave girl of Jabba the Hutt’s (She dies after 5 minutes too. And yep, she’s definitely designed for a kid to dress up as her), or Sy Snootles (ummmm). There was also the mention of women in the Extended Universe who are awesome.

The second kind of response was more insidious. One person said I obviously had never seen the movies. Someone else made sexist comments about how if women made movies they could make them the way they want and that I shouldn’t try to make writers to ‘shoe-horn’ more women in where they don’t fit. Someone else said that ‘everyone knows’ Lucas was heavily influenced by Hidden Fortress , so it made sense there was only one woman. Yeah. Wookiees and robots are all good but more women aren’t. Gotcha.

Both of these approaches are aiming to discredit me and derail the discussion about the representation of women in Star Wars/geek culture, and what that means for little girls. It directs energy towards my obvious wrong-ness and away from the fact that yet another generation of girls get to grow up fighting for the one token ‘girl’ spot on the geek team. I chose iconography from the original Star Wars movie because it is the thing that carries the furthest, but I could have picked almost any western property that includes a branch marketed at children and come up with a similar result. The exceptions being the products targeted directly at girls – Disney Princesses and My Little Ponies to name two.

Little girls deserve more than princesses and ponies. They deserve to be a part of the universes they love. Women invented science fiction and the first super hero. We invented fandom, conventions, fan fictions. Pioneered cosplay. Spend hours on Fan art. We write, we talk, we discuss. We dig deep. And yes, often we critique. That’s a part of how you show you love something. You want it to be better.

My cousin is seven. She lives in the same city as me so I’ll babysit her and her younger brother from time to time. She loves to draw and play games with me. She is acutely aware of which games I have on my phone that allow her to play as her gender. If there isn’t a girl option she gets annoyed and makes a face at me. There are few things I find as frustrating as seeing a young girl make this face at me, knowing it’d have been the face I made 20 years ago. Knowing that nothing much had changed in 20 years.

I don’t want to live in a world where I feel like no gender advances have been made in 20 years, so I’m collecting together positive examples of change. The lineup of games this year has me very excited. I’m going to get to play as a girl SO MANY TIMES this year. When usually one female protagonist is too much to hope/ask for, four times is an absolute dream.

My mother sent pictures of my cousin playing monument valley. It fills me with warm fuzzies to know that she will be able to step into this world through the eyes of Ida. 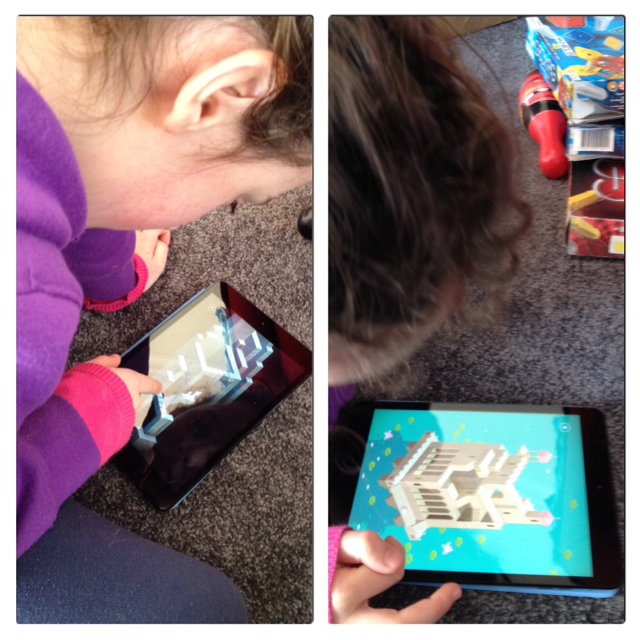 Vella is amazing. I love how she got the action/adventure storyline. She is the one with murderous intent, who is rebelling against the status quo. Her story reads as a pretty tight allegory of the patriarchy, and the way it is so completely entrenched into society that even when a creature is literally devouring your daughters, you are happy about it. 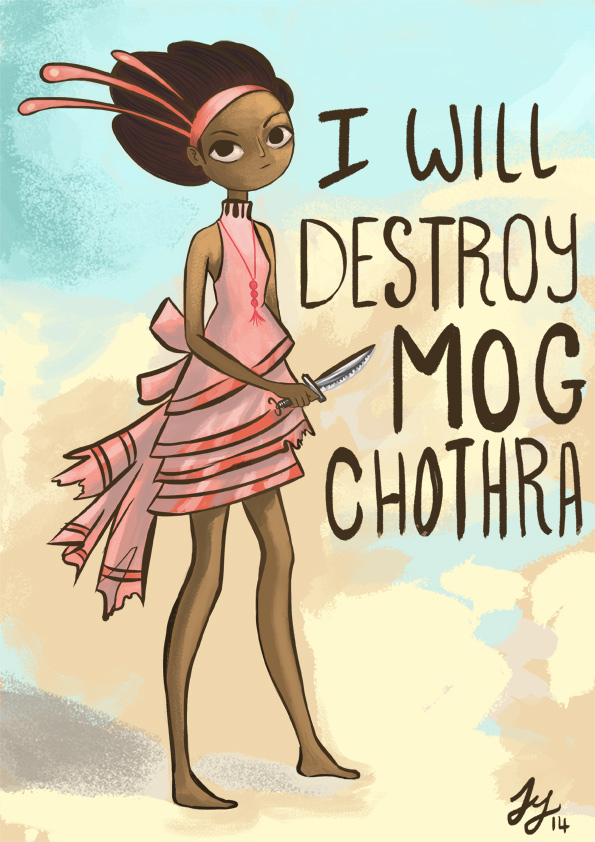 This is released today! I am SO EXCITED. Why yes, I DO want to play as a princess in a game that looks like a living watercolour.

I haven’t done a fan art for this yes, but I probably will make some. Yes.

The trailer gives me goosebumps and the art gives me angry tears, it’s so good. I am in love before I’ve even played a frame. I’m not great at this style of game, but I’m still incredibly excited.

Also, there’s an obvious Klimt influence in some of the concept art. I dig this a lot. 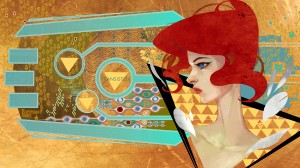 SO Even though franchises like Star Wars are going out of their way to stick to the status quo, and tell girls and women that we don’t belong in geek culture, girls are winning. While misogyny in geek communities continues to try and be loud and discredit the women in their community, girls are winning. Sometimes it feels like an endless struggle. But it’s a struggle that’s worth it. I want to read stories, play games and see movies by and about people of all genders and races. I don’t want to live in this young white male bubble, not when there’s such a breadth of human experience to enjoy.

And the final word of this post goes to The Doubleclicks. I’ve got nothing to prove.

One thought on “A story of Representation in two acts”